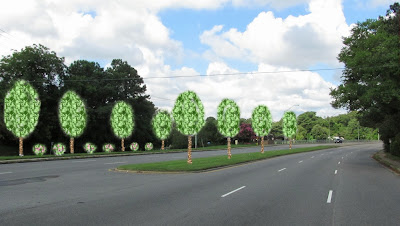 The Indian River Bridge crosses the main tidal reach of the Indian River and is the main connection between the Oaklette, South Fairview and Plymouth Park neighborhoods with the Norfolk Highlands and Tanglewood neighborhoods.  The sidewalks along the bridge are used by pedestrians to walk, bike, or jog from one neighborhood to the other and to area services such as the post office, churches, laundry mat, eateries, food stores, restaurants.

The open space areas around the bridge can act as an important riparian buffer  along the waterways.   On the southeast side of the bridge, there is a large public/open space between Indian River Road and Oleander Avenue.  This area along the roadway has the potential to provide a useful riparian buffer - a vegetative filter - to the Indian River.

The area around the Indian River Bridge was adopted by  the Friends of Indian River in 2012 and we've been practicing good stewardship of the four planters at the corners of the Bridge.  Working through the Adopt-A-Garden program we've performed regular volunteer clean-up efforts, conducted much needed pruning and care to existing crepe myrtle trees, and prepared and maintaining garden beds and plantings around the Bridge.

Posted by Rogard at 1:34 PM No comments:

We had great weather and an energetic, if somewhat small, turnout for our cleanup along Indian River Road today.   Nine volunteers worked their way up and down Indian River Road.  Of those, five worked on the approaches to Indian River Bridge and the shoreline under the bridge as part of the International Coastal Cleanup.   All in all we collected twenty bags of trash - cigarette butts, food containers, beverage cans and bottles, grocery plastic bags, fishing lines, a variety of clothing items, and a bicycle tire.   All trash which is no longer messing up our community or polluting our river. 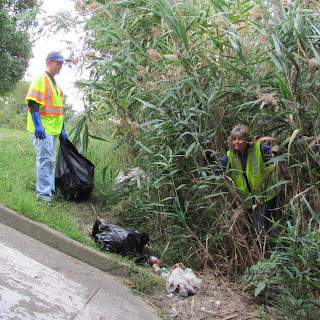 While its unfortunate to report that we collected twenty bags of trash, it is a significant improvement over our initial cleanups along the road and river last year, when we netted twenty bags and forty bags of trash at two separate cleanups.   Our total today is two-thirds less and we're getting done in half the time.

We extend a big thank you to all our volunteers who came out today.   We also hope more of you receiving this can make it out for our next cleanup on November 16th.   Remember, many hands make light work.
Posted by Rogard at 2:39 PM No comments: