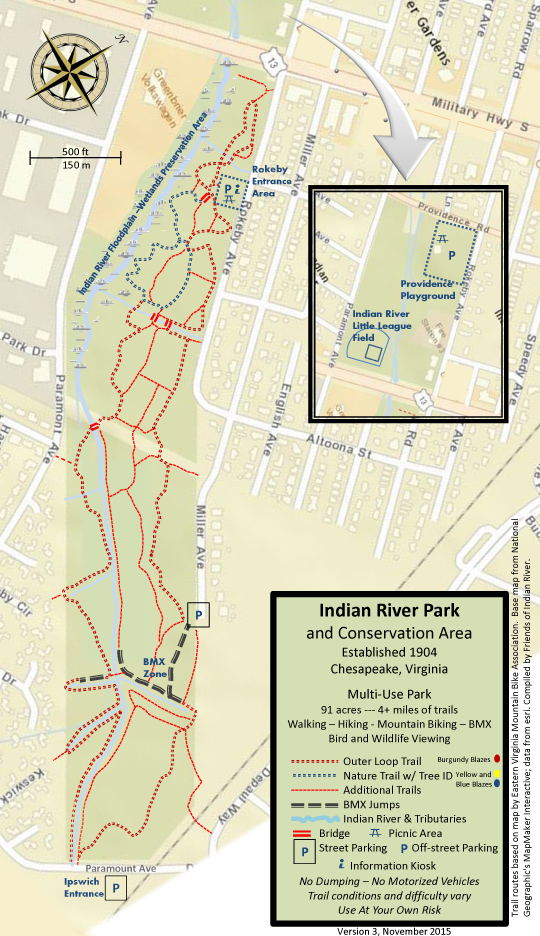 Whether you go to Indian River Park for an adventure or to relax, the park offers miles of trails for you to enjoy. As you explore the park, you will discover a century old forest conserving a variety of native trees, shrubs, and plants.  The forest is home to many different kinds of fish, insects, amphibians, birds and mammals.  It provides them with food, shelter, and pathways to migrate from one area to another.

The entrance to the trail section of the park is located at 2001 Rokeby Ave., at Main St. located south of Military Highway.  The park is part of the city-wide system operated by the Chesapeake Department of Parks, Recreation, and Tourism. 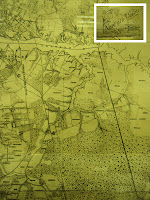 The Chespian Indians originally used this land, once part of the north edge of Buck Trout Swamp, for hunting and fishing before the arrival of the European colonists.  The colonists then divided the area into land grants during the 1600's.  Their descendants used the land for farming for the next two centuries.  A county map from 1887 shows this land as undeveloped woods.   In 1904, a real estate company gave these 90 acres to the City of Norfolk for a park.   But the park continued to be mostly untouched for the next 100 years.  In 2001, the City of Chesapeake formally acquired the park.   In 2013, the Friends of Indian River started work on a nature trail so visitors could learn more about the interesting natural areas of the park.

Wildlife in the Park

A wide variety of wildlife exists in Indian River Park. Mammals include raccoon, fox and gray squirrel.   Birds such as Pileated Woodpecker, Northern Cardinal, Chickadees and Wren live in these forests.  Snapping turtles and garter snakes have been observed, as well as small minnows in the pools in this section of the river.   A wide variety of butterflies, dragonflies, bees and other insects make this their home.
Many more species of wildlife are present in the park than are usually seen. Some are nocturnal, coming out only at night in search of food. These are less likely to be encountered on your walk on this trail. Others are diurnal, feeding during the daylight hours. You may be fortunate enough to observe some of these; however, most will remain hidden.
The practice of good observation skills increases your chances of sighting more wildlife.
·         Walk slowly, stopping often; Sit still and wait for wildlife to show itself;
·         Look up, down and all around; look for footprints, nests and burrows
·         Listen carefully for sounds, indicating the presence of wildlife; Learn to identify birds by their songs;
·         Study the habitat, feeding and behavior characteristics of specific wildlife species;
·         Learn the signs of the different species of wildlife such as their scat (droppings), feathers, fur, and skin. 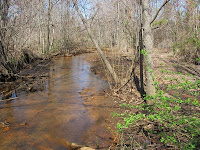 This forest forms an important buffer for the headwaters of the Indian River.
The forest also has a “well connected” flood plain.  After heavy rains, the river is able to spread across the forest floor and slowly soaking into the ground.  This buffer provides many benefits including:
·         Slowing the water flow to reduce erosion of the stream banks,
·         Letting the forest absorbs fertilizers and pollutants washed in from the surrounding neighborhood,
·       Having larger trees and plants shade and cool the water; cooler water holds more oxygen needed by fish.
By providing these services, the water flowing out of the park is much cleaner.  This greatly helps us work to clean the entire Indian River and Chesapeake Bay. 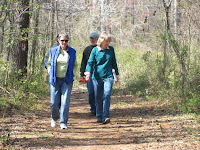 In 2013, a nature trail was developed in the park thanks to cooperative efforts between the City of Chesapeake's Department of Parks and Recreation, the Friends of Indian River, the Urban Forest Trail Blazers, the Chesapeake Master Gardeners, the   Virginia Cooperative Extension – Hampton Roads Master Gardeners, the Chesapeake Arboretum and the Eastern Virginia Mountain Bike Association.   The trail starts at the parking area located at 2001 Rokeby Ave., at Main St. located south of Military Highway. 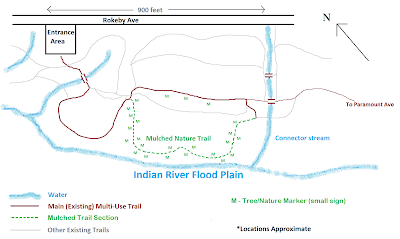