When we held our annual meeting in January of 2020, we could not imagine the level of disruption that the year would bring.   Everyone's plans for the year were upset by the coronavirus.  Many, if not most, organized activities and meetings were cancelled to protect the health and safety of participants.  But as we approach the end of this long year, we are thankful for what was achieved despite the challenges.

For the Friends of Indian River and our community, here are some of the highlights of the year:

As we look forward to something approaching normalcy as 2021, we hope to ramp up our activity as the year progresses.  Key focus areas will include:
We will be holding our Annual Meeting online on Thursday, January 21 at 7 pm to discuss plans for 2021.   Please register for the meeting at https://forms.gle/e7LPruYuh3BBWYGW8
The Friends of Indian River is an all-volunteer, local 501(c)(3) non-profit.  You can support our efforts by becoming a member, renewing your membership, or just making a contribution online at http://www.friendsofindianriver.org/p/membership.html
Year in Review
Indian River Small Area Plan
In late 2019, the Friends worked with the City's Planning Department to kick off the Indian River Small Area Plan study by giving a tour of our area to the City staff and the consultants hired for the project, showing them the good, the bad, and the ugly within the neighborhood.  Ground zero, in our opinion, included the declining business areas along Indian River Road.  We also provided detailed documentation on the area and key points of concern.  The City followed up with stakeholder meetings in the first couple of months of the year. 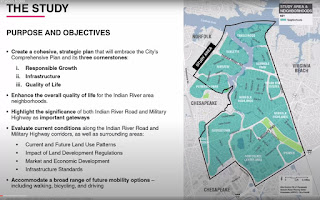 Then the coronavirus hit and plans for a public meeting in March/April were derailed.  In May, when it became clear that the meeting restrictions could not be eased any time soon, the City organized virtual sessions to collect community input on concerns and priorities.   This information was used to develop proposed improvements which were presented in another virtual Public Meeting in November.  A recording of that meeting can be found on the city website.
The Board of the Friends of Indian felt that the planning team did an excellent job listening to the concerns of the community.  The recommendations presented, if properly implemented, can improve the quality of life of our community and strengthen the vitality of the City of Chesapeake.  The Board provided 4 pages of detailed comments to the City on the proposal.   The expectation is to see the final recommendations in early 2021.  Then the plan will be presented to the City Council and there will be additional opportunities for public comment.
Indian River Park 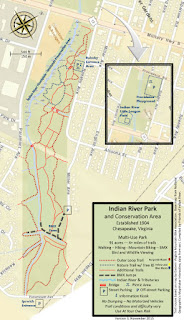 There had been plans for Parks, Recreation, and Tourism (PRT) to host a public meeting in March to gather input on future improvements to Indian River Park.  The park, with its 80 acres of forest and trails, is being squeezed by development, at risk from unsustainable practices, and threatened by the spread of invasive plants.  But, this public meeting was also indefinitely postponed.  In the interim, the Friends have been working with PRT and representatives of the Eastern Virginia Mountain Bike Association (EVMA) to continue preliminary work on building a park plan.  This has included a couple of walking tours of the park, an inventory of the all "features" in the park, and work on a detailed map of the park.  Next steps would include developing a map of the "official" trails and work to remediate issues in the park.  Ultimately, public meetings will be scheduled to discuss these plans.
In the meantime, volunteers have continued maintenance of the trails and the park entrance gardens.  In January, 9 volunteers, including several Tidewater Master Naturalists, came out to the park to work on removing destructive invasive plants, which include English Ivy, Chinese Privet, Multiflora Rose, Japanese Honeysuckle, Linden Viburnum, and (visible in the summer) Japanese Stilt Grass.  The volunteers cleared an area of about 2000 sq. ft. just off the main trail of English Ivy.  Through the year, smaller efforts targeted the other invasive plants listed above. 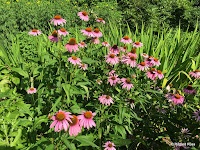 Our dedicated gardeners worked to maintain the entrance garden, weeding and mulching.  We had a setback in the early spring when PRT crews inadvertently weed-whacked part of the garden just emerging from its winter slumber.  Most of the perennials recovered after this early cutting, except for some of the Yarrow.   Still we had magnificent blooms from spring through the fall.  In October, we held an Adopt-A-Park event and a crew of 10 volunteers weeded and mulched the garden for the winter. Soon after our lead gardener planted some new plants to add to what is there.

Plymouth Park
We kept up routine inspection at Plymouth Park.  We had some plans for planting more trees at the site, but again those were derailed by the coronavirus shutdowns.  However, PRT did install a new picnic shelter at the park over the summer. 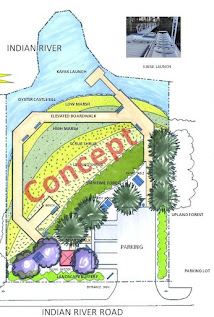 Blue Heron Landing Park (future)
After a minor change of the proposed name for this future park along the Indian River, to be located just east of Oaklette Bridge, PRT was working on formal engineering designs for the reconstruction of the park.  The final plans have not been shared as of this writing, but the word is that the overall plans are similar to the original conceptual design.   Hopes are that the plans will be approved in 2021 and we'll see construction start soon thereafter.
Indian River Gateway
Back in 2014, the Friends worked with the City plant plum trees and golden rain trees along Indian River Road.  We also planted Bald Cypress trees in the median of Indian River Road.    Unfortunately, we have lost several of the plum trees along the road to cars speeding along Indian River Road, losing control and jumping the curve.   In September we reached out to the City's Landscape Coordinator and the Traffic Department to talk about replanting the lost trees and adding better signage to mitigate the hazard of the curve on the east side of the bridge.  Ultimately, we'd like to see traffic calming along the roadway to reduce the speeding along the road, especially in Oaklette; we also addressed this issue in the Indian River Small Area Plan.
The City Landscape Coordinator helped to create a comprehensive proposal to do planting in the public right of way on the south side of the roadway; including berms and traffic signage.  This planting would also use native trees and shrubs to provide wildlife value.  During 2021, the Friends will work to find funding to turn the concept into reality. 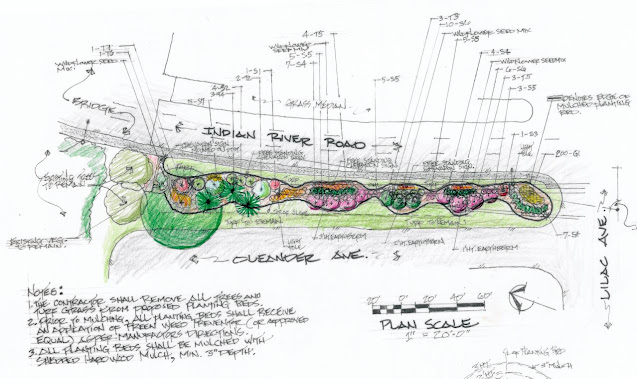 Cleanups and Beautification
During this year, we've been encouraging individual efforts to help with litter reduction.   Ultimately we need to cut the littering by individuals, especially of single use plastics, to solve this problem. 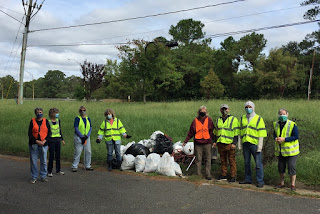 We held two organized cleanups in September for the Great American and International Coastal Cleanups.  Volunteers collected about 400 lbs. of trash around the bridge and the future Blue Heron Landing Park.  And a week later, volunteers went out by canoe and kayak to clean up along the shoreline, removing about another 100 lbs. of debris.   We know several of these volunteers have been back out since then to collect more litter and many other citizens do the same.   We thank everyone for doing their part.
Our Business Outreach Committee continued efforts to beautify Indian River Road, our "Main Street" with upkeep of planters at key locations.  The Committee kept in contact with the Chesapeake Economic Development Department on efforts related to the Indian River Shopping Center, getting updates on the owner's on-going efforts to make façade improvements, hook up with the new city water lines being installed in the area, and ultimately find new tenants for the center.
The Friends also sponsored its second annual "Main Street" Indian River Holiday Decoration Contest.  Winners were selected based on overall appearance, festiveness, and appropriateness for the site.  Top awards this year went to Affordable Transmission, Botanica Spiritual House, and Fast Food Mart.  Congratulations to the winners and all those who participated.
Nature Hikes
Our usual series of nature hikes at Indian River Park was curtailed by coronavirus safety concerns.  But we did get in our annual Great Backyard Bird Count at Indian River "Woodland" Lake between the Indian River Middle and High Schools.  The group identified 27 bird species plus an unidentified raptor (perhaps an immature eagle).
Indian River High School Scholarship

A new program we started in 2020 was the Friends of Indian River Education Scholarship Award.  The Scholarship is awarded to a graduating senior who embodies the spirit of the Friends of Indian River mission and excels in leadership, citizenship, extracurricular activities and academics.  Our first award of this scholarship went to Jalan Davis, whose involvement in Sports, the National Honor Society, the Marching Band, community service activities, and part-time employment are all examples of a commitment to advance personal goals and to serve the community. We are very pleased to have such an exemplary student and citizen as our first ever scholarship recipient and we wish him many successes in his future endeavors.
Graduates in the class of 2021 will be able to apply for this scholarship in the coming months.
Civic Engagement
We cancelled most of our meetings in the first half of the year, but in the fall we started to hold our meetings online via zoom.  This brought us several interesting guest speakers including:
In early March, the Friends of Indian River was a sponsor and participant in the City's first ever Chesapeake Conservation Conference, hosted by the Chesapeake Environmental Improvement Council (CEIC).  The Conference brought together environmental groups and concerned citizens from across the area to discuss the status of environmental initiatives in Chesapeake.  Our Vice President, Carol Warren, sat on the Home and Garden Panel to discuss activities that groups and individuals can take to improve environmental stewardship in residential areas.  Learn more about the conference at https://www.cityofchesapeake.net/government/Boards-Commissions/full-listing/ceic/Chesapeake-Conservation-Conference.htm
The Friends also worked with the CEIC to compile a list of 50 Ways to Help Our Planet for the 50th Anniversary of Earth Day - http://www.friendsofindianriver.org/2020/04/
Awards and Recognitions