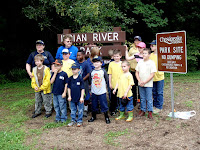 This year the Friends of Indian River hosted cleanups at two sites - our 4th year at Indian River Park and, for the first time, Plymouth Community Park on the west shore of the Indian River.

At Indian River Park, 81 volunteers pull about 530 pounds of litter. We thank all the volunteers who came out including Cub Scout Packs 42 and 700 and Boy Scout Troop 303. This year we expanded efforts into new areas south of the power lines that we didn't reach previously. And, we're very happy to report that the total trash collected was 40% less than last year haul and only half of the 1000+ pounds we collected in 2014 - a really positive trend. 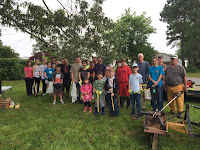 This was our first year at Plymouth Community Park and perhaps the first cleanup at this site by anyone in a really long time. Plymouth Community Park is a small 4.5 acre park wedged between the Plymouth Park and Campostella Square neighborhoods along the river. The park consists primarily of a riparian buffer along the river and a stream, an open field, and has no amenities. About 30 volunteers came out and collected over a 1000 pounds of trash including 13 tires and items like an old microwave. We had to bring in a small tractor to help haul some of the stuff out. A big thank you to the volunteers at this site and our first time Zone Captain Carol. We hope to see increased community involvement and stewardship at this site and are planning to return for the International Coastal Cleanup in September. 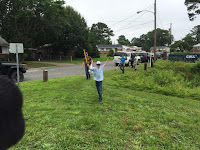 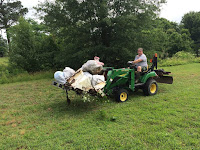 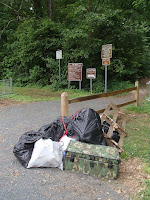