2015 was a busy year for the Friends of Indian River and our community. Our organization is entirely driven by our volunteers and we are thankful for all their efforts. This year saw significant progress in efforts to spruce up Indian River Road, enhance Indian River Park, and further the Eastern Branch Restoration Strategy. Our outreach efforts are expanding and we’re taking a more active role in area planning and zoning efforts. We also wish to thank the many partners who have supported these efforts including the Chesapeake Departments of Parks, Recreation & Tourism (PR&T), Public Works, and Public Utilities, the Elizabeth River Project (ERP), the Chesapeake Bay Foundation (CBF), the Chesapeake Master Gardeners, and the Chesapeake Environmental Improvement Council (CEIC).

The Friends of Indian River invite you to attend our Annual Meeting on Thursday, January 21, 7 pm at Oaklette United Methodist Church, 520 Oaklette Drive, Chesapeake, Va. 23325. We will hold elections for our officers and board and discuss plans for 2016.   With the continued support of our members and volunteers, we will build upon this year’s successes.

From cleanups to outreach, trail maintenance to administration, photography to gardening, volunteers have been working diligently to make our community a better place to live. We tallied over 800 hours on our projects and those don’t include other volunteer efforts by our members supporting the Elizabeth River Project, the Master Gardeners, the Chesapeake Environmental Improvement Council, local civic leagues and churches, and folks just working to fix up their personal backyard ecosystems.

Some of our most visible progress is at Indian River Park. We started in January with the planting of the native plant garden at the trailhead entrance, which bloomed beautifully through the spring, summer, and fall. Keeping the entrance area looking nice took lots of effort from many gardeners, organized by Master Gardener Amy Weber, to weed, prune, and mulch the area. Plant identification signs were ordered and installed over the summer. We had plant donations from Southern Branch Nursery and Meadows of Bliss Nursery. We worked with PR&T to revise their maintenance and mowing schedule at the entrance area. In the fall, PR&T also delivered us more mulch and installed a new “apron” at the parking lot entrance. The Friends also continued to hack back the English Ivy, Japanese Stilt Grass, and other invasive plant species. And with our support, Eagle Scout Candidate Randy Riffle organized the building of a bird blind along the nature trail.

In June we hosted the annual Clean the Bay Day at Indian River Park, bringing in over 90 volunteers and removing at least 850 pounds of trash from the park and its stream. Groups including Cub Scout Packs 42, 700, and 800, the Junior Master Naturalists, the Oscar Smith High School National Honor Society, Capital One Bank, and local residents, all participated. And we wrapped it all up with a tasty picnic and cookout lunch for the volunteers.

4. Roadside Cleanups and Upkeep of Bridge Gardens and Trees

The Friends continued our Adopt-A-Highway and Adopt-A-Garden projects along Indian River Road. Across four cleanups, including one set aside for the International Coastal Cleanup around the bridge, our teams collected about 60 large bags of full of trash, litter that would otherwise be washed into our river and bay. We’ve also tried to get the word out to prevent litter including the “Cigarette Butts=Litter” campaign. We continued our gardening around the bridge, keeping up the four corner gardens and tending to the young trees that we planted along the median last year; we’re happy to report we’ve only lost one tree and have high hopes for their long term prospects.

We strengthened our partnership with the ERP to promote the River Star Homes program. Several of our members are already taking advantage of the ERP’s programs to help pay for landscaping to build Living Shorelines and/or Lawn Makeovers on their property. The City has signed an agreement with the ERP to help fund the initiative as a way to meet the city’s clean water goals. And as part of that effort, the Friends provided the Cooperative Extension Office with a database of addresses adjacent to the Indian River; the Cooperative Extension Office use this information to send these residents more information on Living Shorelines and invite them to a seminar. The seminar was popular with local residents attending to learn more and get information from representatives of the ERP and the Friends. Several members are also working on the permitting to establish oyster reefs along their shorelines. 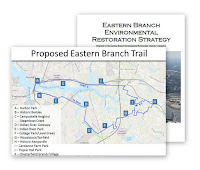 Focusing on one of the key goals of improving public access – and thus public awareness - we’ve been working with the ERP and PR&T to get the city to establish a canoe/kayak launch site along the Indian River. Options have been identified and we’ve been working together to try to address the funding challenge to make this a reality. We’ve also been participating in an effort to establish a new Eastern Branch Bike Trail through our area. The proposed route would extend along Indian River Road through Oaklette before cutting through Norfolk Highlands to Rokeby along Indian River Park and then continue off into Virginia Beach. Presentations have been made to both the Chesapeake Bicycle and Virginia Beach Trails Advisory Committees. The Chesapeake committee already voted to endorse the concept and, separately, the Norfolk Planning Commission approved a new Strategic Bike Plan that includes a bike route along Indian River Road in Norfolk.

7. Great Speakers at our Monthly Meetings

We continued our speaker series at our regular meetings. Guest speakers this year included: 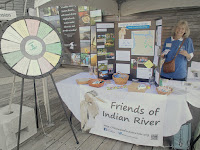 The Friends hosted several nature walks around the area including spring and fall hikes at Indian River Park and bird watching at Indian River “Woodland” Lake between the Middle and High School. We were a key partner at this year’s RiverFest celebrating the Eastern Branch. We organized a tour for our members of the CBF’s new ultra-green Brock Environmental Center on the Lynnhaven. And our social media outreach continues on Facebook, Twitter, and E-mail; in the last month we topped 400 likes on Facebook. Now we’re working with PR&T to host a BioBlitz, including a series of nature walks, at Indian River Park in April, 2016.

This fall, we sponsored a special outing for our members on the CBF Education Boat Jenny S out on the Lynnhaven River. Eighteen members spent 4 hours touring the river, collecting samples of the local sea life, and learning about ecosystem of an estuary very much like our own Indian River. This was a great opportunity for building our environmental literacy and building stronger friendships within the group.

In March, we were honored to receive the Communications Award or our environmental activities by the Chesapeake Environmental Improvement Council (CEIC). And in October we received the Award for Environmental Excellence - 2015 Fostering Partnership from the Hampton Roads Alliance for Environmental Education for our efforts supporting RiverFest

A few items didn’t make it into our win column, yet. In December, the Chesapeake Planning Commission approved a plan to build 240 apartments on in 18 acres of woods adjacent to Indian River Park. While we did succeed in getting the building setback from the park increased from 60’ to 90’, there are still numerous concerns associated with the project including the impact on local school crowding. This Zoning Request goes to the City Council for final consideration in January.

We’ve kept up pressure on the City regarding the situation with Aqua Virginia and the Indian River Shopping Center. The City has been in negotiation with Aqua Virginia and there is a proposal for Aqua Virginia to upgrade its water system (to provide fire suppression capacity) in conjunction with the City’s plans to upgrade the area’s Sewer System in 2017. This would resolve one of the key stumbling blocks to re-developing Indian River Shopping Center. But engineering plans still need to be developed and a written agreement between the City and Aqua Virginia is targeted for 2016. The proposal is not a sure thing and we’ll be tracking this effort to ensure that there is follow through.

We will be discussing plans for 2016 and getting membership input at our Annual Meeting in January. We’re looking to continue with our cleanups, gardening, and park efforts. We expect to help with the ERP’s Living Shoreline and Oyster Reef Projects. Of course, we will continue to partner with the City on projects such as the Canoe/Kayak Launch Site, the BioBlitz at Park in April. There is also discussion to hold a Mini-RiverFest/Community Day in our area, perhaps in conjunction with grand opening of new Activity Center at Indian River Park.

We look forward to your continued support and participation and to make 2016 a bountiful year for the neighborhoods of Indian River.
Posted by Rogard at 9:06 AM