Update 3 PM: A small, but dedicated crew came out in the early morning fog and worked on the English Ivy removal in the park.    With the goal to stop the Ivy that had climbed into the tree tops, six of us moved in with loppers, clippers, and saws.   The tactic was to remove the ivy from the bottom 4 to 6 feet of the tree, which leaves the Ivy higher up to wither and die.   This approach saves the tree from slowly being choked and prevents the the Ivy from producing seeds which are spread to other parts of the park.   We cut the Ivy from about a hundred trees.  A reporter from the Chesapeake Clipper came out to see us in action, so look for an article in next weeks Clipper.

We are planning to tackle another area of Ivy next month, on Saturday, February 9th.   Come out and join us!

On Saturday, January 12th, 9 am,  the Friends of Indian River will be having a volunteer event to remove English Ivy in Indian River Park.  We'll be meeting at the park parking lot at Rokeby Ave. and Main St. (on the south side of Military Highway away from the firehouse).  Wear long pants, close-toed shoes, and bring work or gardening gloves. Bring pruning clippers, loppers, and/or pruning saws if you have them.

Indian River Park is a beautiful 90 acre oasis in our community with miles of trails, century old trees, and a variety of wildlife.   It protects and buffers the eastern headwaters - the source - of the Indian River.   Volunteers from the Chesapeake Arboretum have identified at least 33 species of native trees in the park including massive old Beech trees and Tulip Poplars.   A variety of birds from tiny Wrens to our biggest woodpecker, the Pileated Woodpecker, can be spotted amongst the trees.   The park is favorite local walkers and for the bikers of the Eastern Virginia Mountain Bike Association.

But the park has been invaded.    While most of the park is mostly clear, several large areas of English Ivy are established and dozens more hot-spots exist around the park.   Started from seeds dropped by birds, the English Ivy if left unchecked threatens to turn Indian River Park into a green desert.   While birds do eat the seeds of mature Ivy, little else does.   The Ivy crowds out all other ground cover, smothers bushes, and eventually overtops and kills trees.   Having little nutritional value to wildlife, it breaks the food chain so birds and  animals are also forced out of the park.   Eventually you have nothing but a boring green carpet of one kind of leaf. 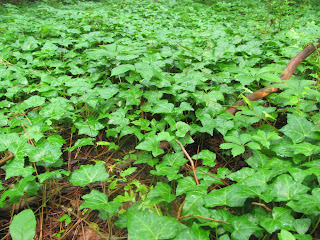 But the invasion is still early and the impact is limited.   If we get in there now we can contain and start rolling back the invaders.    Our first step will be to stop the Ivy from crawling up the trees; when it climbs the tree that it matures and starts making seeds.   Stopping the tree climb will dramatically slow the spread giving us time to eliminate small outbreaks and eventually strip out the major outbreaks.

On-going vigilance will be needed but come out and join us this Saturday as we take our steps to push out this green invader.

There is a good video on English Ivy removal steps at http://www.portlandoregon.gov/parks/article/201781
and another straight forward list of instructions at http://ivyout.org/ivyremove.html
Posted by Rogard at 8:00 AM 23 comments: