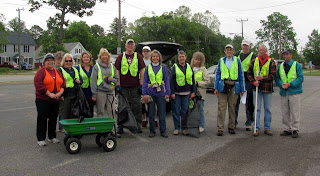 Bright and early this morning, 16 volunteers gathered at the Oaklette United Methodist Church to participate in the Friends of Indian River's first big event.   As part of the Great American Cleanup and Chesapeake's Adopt a Highway program, we were there to cleanup trash along Indian River Road to spruce up the neighborhood.   Getting the debris off the street would also keep it from being washed into the river and harming wildlife. 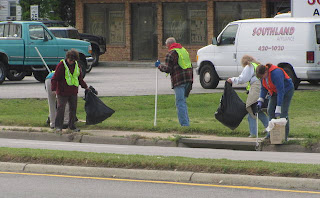 After a brief safety orientation and announcements, the group split into three teams, one heading west from the river, the other two working their way across the Indian River Bridge to the business district.   Bottles, cans, food wrappers, a lawn chair, and thousands of cigarette butts awaited us.  The worst areas for larger pieces of trash were along bridge abutments.   The cigarette butts - which are NOT biodegradable -  were everywhere, even on the fresh mulch under the pretty landscaping by the new Nationwide and Changing Trendz Hair Salon establishments.   Kudos to Beasley's Market for a very clean area, Papa John's for fresh plantings on their corner, and to both Irwin's Pharmacy and J&J Hardware for their pretty flower displays. 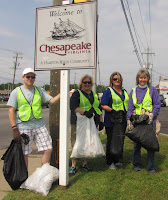 Three hours and many knee bends later, we had collected about 20 bags of trash and had the satisfaction of tidying up over a mile of the roadway.    On our return walk, a few of our volunteers handed out fliers to some of the businesses along the way.   Our next event will be to return to the area around and under the Indian River Bridge for Clean the Bay Day on June 2nd.
Posted by Rogard at 6:27 PM

Email ThisBlogThis!Share to TwitterShare to FacebookShare to Pinterest
Labels: Events