Litter in our rivers, on our coasts, and in the oceans

Last Saturday I was very busy.    I spent all of the morning and part of the afternoon participating beach cleanup event at the Back Bay National Wildlife Refuge.   Organized as part of both National Public Lands Day and the Ocean Conservancy's 2011 International Coastal Cleanup, I went out with a group of volunteers - including families from the company Booz Allen Hamilton, some scouts, regular volunteers and staff from Back Bay - to pick up trash along the beach.   We covered one mile of beach and collected a pickup truck full of trash.   The greatest quantity of items were plastic bottles, plastic bottle caps, plastic bags, food wrappers, and unidentifiable pieces of plastic and styrofoam. 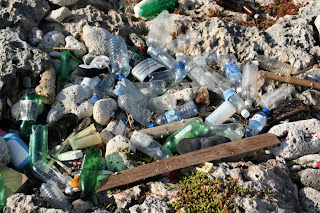 One of the kids asked why folks would throw all this garbage on beach.   I explained that most of this garbage was not discarded on the beach but was washed onto the shore from the ocean.   Most of it started as litter in city and suburban streets, malls, and shopping centers.  Tossed by careless people, falling out of overfilled trash cans, flying out of the back of trucks, being blown out of landfills, the trash get washed into the storm sewers by the rain and flows right into our rivers.   First this trash clogs the river shorelines but slowly much of its is washed downstream into the Bay and then into the Atlantic Ocean.    Some of the garbage gets washed back on our beaches, but much more gets pulled by wind and currents out to sea.

Out in the middle of both the Atlantic and the Pacific, there are great oceanic garbage patches littered with floating plastic debris from our modern world.    Caught in the center of the great ocean gyres - the centers of rotation of the major ocean currents - the trash floats endlessly because these plastics don't degrade for thousands of years.   If anything, the plastic just breaks down into smaller and smaller pieces of plastic.   This debris ranges from recognizable items like bags, bottles and caps down to microscopic bits.  The plastic is too often mistaken by sea life for food.    Sea birds eat bottle caps and old lighters.   Turtle think plastic bags and balloons are jellyfish.    Plankton eating fish sweep up the microscopic bits of plastic.   Of course none of this plastic is edible and much of it gets stuck in the animals digestive track.    Dead sea creatures - turtles, sea birds, even whales - have been found with their stomachs filled with plastic trash, likely contributing to their deaths through starvation.   One well documented example of plastic impact on sea life looks at the albatross colony on Midway Island in the middle of the Pacific, which is about as far way from civilization as you can get - http://naturefinder.blogspot.com/2009/03/midway-atoll-national-wildlife-refuge.html.   The plastic may even be working its way into the human food chain as smaller fish eat the microscopic plastic bits, the bigger fish eat the smaller fish, and we catch and eat the bigger fish.

What can we do about all this?   Well, first of all make sure you don't litter and that all your trash is securely disposed of in trash containers so it doesn't escape.   If you do see litter, help to pick it up.   Of course, recycle the plastics when you can - although this is not as simple as it sounds since most plastic is not easily recyclable and most recyclers only take plastics labeled Type 1 and Type 2.   Ultimately, the best solution is to reduce the amount of plastics used for packaging.   Because they are versatile, light weight, and relatively cheap, plastic packaging has become pervasive in our society and reversing this trend will require that we make some serious choices.
Posted by Rogard at 12:56 PM