(Revised Feb 25, 2012)
Friday morning I donned a pair of rubber boots and headed for Indian River Park.  Parking by the Youth Center on Rokeby and Providence, I walked over to the culvert where the Indian River flows under Providence Road.  On the north side of the road, the river turns tidal and slowly broadens into a wide estuary.  But on the south side it is a small stream draining the surrounding suburban neighborhoods, sheltered by Indian River Park.  My goal today was to hike up along the river to I-64, just short of its source which is on the farside of the that superhighway. 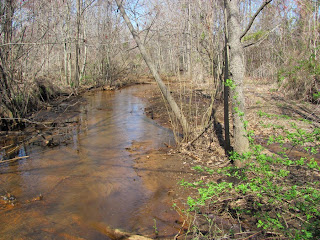 My first steps on this ‘creeking’ expedition where not encouraging.   The water was only about 6” deep but as I stepped into the stream my foot sank into a bottom deep with sediment.  Extracting myself, I bushwhacked a few yards upstream and, fortunately, the streambed turned sandy and firmer.  Overall the stream was fairly well connected with its flood plain.  There was no deeply eroded channel, just a broad bowl through which the little river flowed.  This was a good sign as the river could expand easily during storms, slowing the water flow and reducing the sediment and fertilizer load dumped into the tidal estuary, and ultimately the bay.  The park at this point is only a city block wide, the woods flanking the river a typical second growth forest with a mix of trees perhaps 50 years old.  A stand of phragmites stood on the right bank as I started upstream.
Alternating between the stream bank and streambed as conditions allowed, I took an unscientific inventory of the flora and fauna as I went.  Birdsong filled the surrounding trees.  At one point I stopped to listen to a pair of Blue Jays call to each other from opposite river banks – “too-oot, too-oot.”  About 200 yards upstream I came across some subaquatic vegetation in the river,  long grasses pulled horizontal in the shallow current, probably sago or horned pondweed.
A few hundred yards further, as I neared Military Highway – the aging primary road that 60 years ago was the area's original ‘beltway’ – the channel narrowed and deepened.  (What I originally thought was Japanese Stilt Grass but now identify as) native bamboo Arundinaria filled both banks and English Ivy was visible on some of the trees.  As I continued upriver, alternating between banks to find the clearest path, three mallards hurried away ahead of me.  After a few minutes I emerged from the thicket onto Military Highway.  Just before the roadway was a deep pool clogged with debris, both natural and man-made trash.  But even here nature sought a foothold and three turtles basking on the debris pile.  Their carapaces were brown with mud but I think they were Red-bellied Turtles.

Continuing on the south side of Military Highway, the stream again broadened and shallowed.  The park gets a bit wider and more diverse.  Within the river were significant stretches of subaquatic grasses.   Whenever an eddy in the stream provided an area of calm, I could find a school of 20 to 30 minnows – inch long fish.  I startled numerous frogs along my trek.  Raccoon tracks covered the stream banks.  The stream was still connected to its flood plain and the stream often broadened into multiple rivulets, swamping some areas.   About three hundred yards along was a stand of grand old trees with trunks 4 to 6 feet in diameter, including several oaks and what I believe is a huge beech.  Cardinals, Thrushes, and Grackles moved through the tree line.


As I approached the power line transmission corridor midway through the park, the Arundinaria bamboo became so thick I had to hike away from the river to find one of the park trails.  In this area there were also several pockets of English Ivy, another invasive, growing up trees.

Beyond the power lines the stream’s character changed again.  The stream took on a more ‘engineered’ look, straighter and with higher banks, probably altered decades ago to speed the water drainage from the surrounding developments.  In the shallow stream there were still lots of invertebrates – water striders – but almost no fish.  The stream bottom varied between firm sand and quicksand silt.  I stepped into one of these quicksand traps and quickly got a boot full of water. The only major fauna I stumbled upon, actually almost stepped upon, was a large snapping turtle in the stream.  I’m not sure who was more startled but the turtle quickly moved into a deep pool beneath a log.   As it went I could clearly see its leathery tail and sharp claws; not a character to mess with.  In the final stretch up to I-64 the stream dwindled and the river bottom was filled with leaves.  The stream disappeared under a dark and rock blocked culvert below the I-64 highway.
Overall the hike up the river revealed a mixed bag.  Surrounded by a long developed suburb where almost 50% of the land was covered pavement or rooftops, the park is not a pristine wilderness.  At places invasive English Ivy is making deep encroachment, but much of the park still is filled with native nature.  The river is home to fish, frogs, turtles.  Birds sing in the canopy and raccoons - and most likely foxes - hunt in these woods.  Native plants  - including wildflowers like blue violets and mayapples - pushed up where the invaders were not dominant.  And hundred year old giants tower above it all.  Definitely a landscape that is worth enjoying and worth saving.
Posted by Rogard at 5:04 PM 1 comment: