State of the Indian River

Indian River Road.  Indian River Library.  Indian River High School.   We pass these places most every day, but how often do we think about the actual Indian River?   Although we sometimes overlook it, we have our own corner of the Chesapeake Bay flowing right through the middle of our community.   And we are inescapably tied to this waterway.   The wetlands provide a buffer and sponge during storm driven high tides.   The river provides habitat for the birds we enjoy watching.   The river offers recreation for boaters while the upland forest in Indian River Park has miles of trails for off-road bikers.   The proximity to a tidal waterway enhances property values.   A healthy and accessible river can also bring in businesses and drive beautification efforts.
Yet our proximity also stresses the river.   Centuries of development have left their mark on our river and the whole Chesapeake Bay.   Every time it rains, pollutants are washed through the storm drains and into the Indian River.   The Indian River is part of the neighborhood and it needs our care.
The Community and Watershed 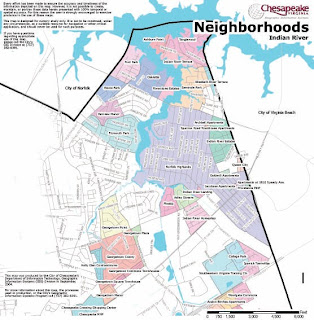 The Indian River is a small tributary of the Eastern Branch of the Elizabeth River, itself a tributary of the James River.   Starting as a series of small creeks draining the relatively flat coastal plan, the Indian River turns into a broad tidal estuary, a mix of fresh and salt water that should be a rich marine ecosystem.  Downstream from the Indian, the Elizabeth flows through Norfolk and Portsmouth and forms one of the busiest working harbors in the world.
Over the past 100 years a mature suburban neighborhood has grown up around the Indian River.   Bounded by City of Virginia Beach on the east, Norfolk and the Southern Railroad line on the west, and I-64 on the south, the City of Chesapeake neighborhood that bears the river’s name encompasses just over 5 square miles and is home to over 24,000 residents.    Three major roads cross the neighborhood from west to east: the Indian River Road which has the only bridge over the tidal river, Providence Road which can be found on maps dating back to the early 1800’s, and Military Highway.    Another 4 square miles of the more recently developed Greenbrier neighborhood south of I-64 also connects into the watershed and adds another 20,000 people to the mix.
State of the River
For the past 20+ years the Elizabeth River has been the focus of intense efforts to cleanup and reverse the ravages of centuries of industrial and urban development.    Thanks to the Clean Water Act and efforts by organizations like the Chesapeake Bay Foundation and the Elizabeth River Project, progress has been made  to “remove the goo” of chemicals that coat the river bottom along the shipyards and riverfront factories.

Less stressed by the heavy industry and contamination than the Norfolk and Portsmouth waterfronts, the upper reaches of the Elizabeth River including the Indian River are nonetheless considered “severely degraded”.     Surrounded by thousands of homes and businesses, miles of paved roads and parking lots, the water quality is poor.   As part of the restoration efforts on the Elizabeth, the Virginia Department of Environmental Quality maintains several monitoring sites including one on the Eastern Branch of the Elizabeth, just beyond the mouth of the Indian River.   The data results show major areas of concern including:
High Bacteria Levels – the Elizabeth River has been closed to oyster and clam harvesting since the 1920’s due to bacterial contamination.   Although the region has been served by waste water treatment facilities since the 1940’s and is now served by one of the most modern plants in the nation – the Virginia Initiative Plant (VIP) in Norfolk – bacterial contamination is still at unsafe levels.   The culprit today is from “non-point sources”, mostly from fecal contamination from wildlife – such as geese - and household pets – often the family dog.
Excessive Nutrient Levels – nitrogen and phosphorous are two essential elements for the growth of plants.  We put down fertilizer to provide these elements to our crops, and in this watershed – and in the whole Chesapeake Bay watershed in general – the largest single crop by acreage is lawn grass.   When it rains excess fertilizer is washed off the lawn, into the storm drains, and into the Indian River.  The waters of our river and bay are heavily over-fertilized.    This abundance of nutrients causes algae to bloom in the water.  This in turn has two effects: water clarity is reduced blocking sunlight to sub-aquatic vegetation at the base of the food chain and, when the algae die and decompose, oxygen is robbed from the water.   And this brings us to the third issue…
Low Dissolved Oxygen – particularly in the summer, the algae blooms coupled with slow water exchange in our tidal estuary results in the depletion of oxygen levels in the water.   Although fish and crabs may live underwater, they still breathe oxygen that they extract from the water.   When the oxygen levels drop too low the fish, crabs, and clams either flee or die.   These low oxygen zones get the ominous name of “dead zones”. 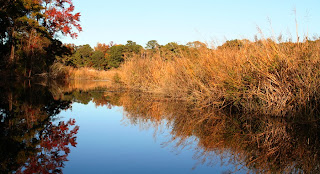 However, the news is not all gloomy.   A simple canoe trip up the Indian River illustrates that the waterway is still quite alive.   In the fall we paddled to the head of tide past thick stands of native aquatic cordgrass teeming with hundreds of Red-Winged Blackbirds.  We passed dozens of Mallards while Great Blue Herons, Egrets, and Kingfishers patrolled the shores.  A late migrating Osprey soared overhead.    During the winter, the Indian River is home to Bufflehead ducks, Mallards, and Cormorants.
Despite being in the middle of our century old suburb, there are still long stretches of living shoreline along the Indian River lined with aquatic rush grasses backed by mature trees and shrubs.  The upland reaches of the left branch of the Indian River is protected by the linear Indian River Park providing some 70 acres of mature forested buffer crisscrossed by trails. 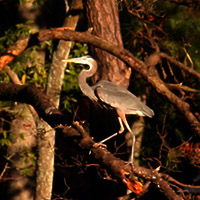 What can you do to help?
There are a few simple things each of us can do to help improve the environment in our community.   Homeowners can minimize the use of fertilizer on their lawns.   Pet owners can “scoop the poop” and make sure it is properly disposed of with your household trash.    Everyone needs to stay informed.  If you are interested in learning more drop me a note at rogard@yahoo.com or Like us on Facebook.
Posted by Rogard at 6:37 PM No comments: